In my last blog, I wrote about Headline-Fateline Combined.
This article is about Fateline-Lifeline's combination or replacement of Lifeline by Fateline.

When Lifeline stops in the middle and is taken over by the Fateline, the Fateline plays the role of Lifeline from that stage onwards. Consider the below picture: 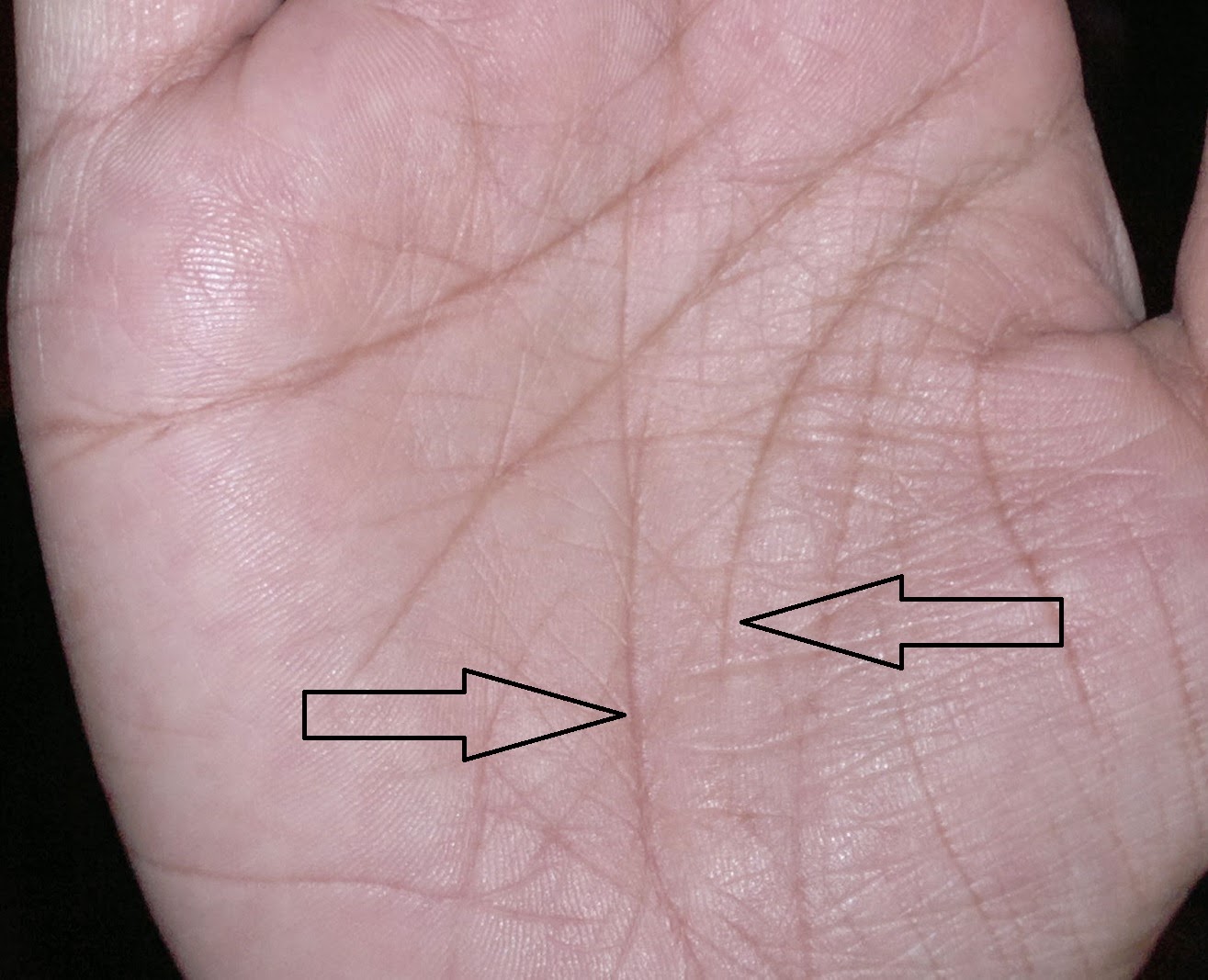 You can note that the Lifeline stops almost in the mid of its journey and then gets the support from the line of fate. The lower half of the lifeline indicates the roots and anchor of life, which we find in our body, family, relations, culture, place of living, culture etc and provides stability to life, which in this case is missing. The reason for this missing can be anything.

However, in this case, the lower portion then gets support from the Fateline. This overall formation indicates that the owner, has his/her stability, security and rootedness found with his work/career, social values, money and not on the other parameters that I mentioned about Lifeline, above; Depending on the other parameters of the palm, this could also indicate that the owner is workaholic in nature and losing balance, in which case - making him aware of this nature may help him to understand himself better.

With this understanding of the nature, the owner of this hand can then be suggested to find a job/hobby/activity about which he is deeply passionate about(using other features - such as fingerprints) and can then lead the life with this awareness.

There are several other variations of this case and interpretations - like the break in the life line, combined with other parameters can be used to see, the event that occurred in the owners life at that specific stage.

I hope, this article helped you in understanding the combination and differentiating features. Appreciate your comments and feedback.
Posted by Kiran Katawa at 7:43 AM 2 comments:

The headline indicates the way you think, the amount of time you keep thinking, the influence of the family and society on your thinking, the areas of your life where you're confused etc. These are captured based on various parameters of the formation of the line of head such as its starting point, its termination, the marks(like island, cross, cuts etc) on it etc.

The line of fate(bhaya rekha), also called as line of Saturn indicates the values you follow, their origin(are they influenced by the values of your family or quite eccentric), your style of execution of the tasks and responsibilities in hand (will you take the task to completion, will you always hold on to one task or project or multiple at a time), whether you like analysis and brain storming kind of jobs or the ones which includes execution, materializing kind of jobs and so-on.

Often, we come across hands, in which the headline gets blended with line of fate and they appear as one.The combination of these 2 lines, combines the features of what the headline indicates with that of the line of fate. So, it turns out to be that the person lives the idea, the thought is the direction, the thought itself gives the value, living the thought in every moment of the life(like the way we live with set of values always, with or without our awareness). 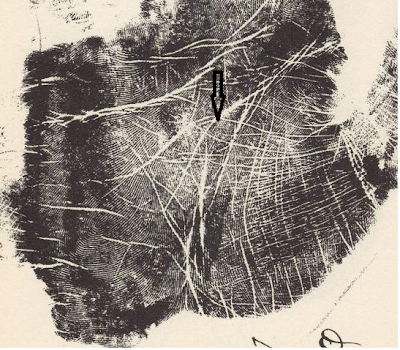 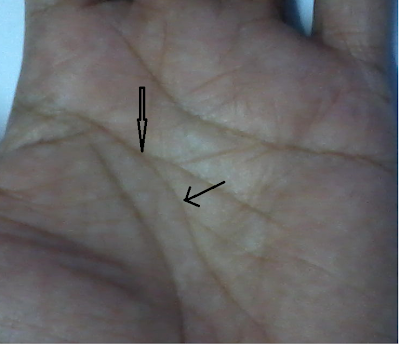 The 1st one, which is an ink print, is LH of Walt Disney.
Consider the following statements from Wikipedia about Walt Disney, the creator of the character Mickey Mouse.
It says - "for Mickey Mouse Disney himself provided the original voice"
In the words of one Disney employee, "Ub designed Mickey's physical appearance, but Walt gave him his soul."

The other hand is that of a person who is obsessed with painting to such an extent that painting is the direction of her life, she is willing to go to any extent in her life(within her defined boundaries of values) for painting; painting also makes her to choose the values with which she would act; she defines the path of her life with painting.

Note that both of them have a branch of head line running straight across the hand also, which also makes them think pragmatically. For ex: Walt Disney making money out of his ideas, making the character available to public.
We do, however, come across peoples, who are also passionate about their profession or ideas, but, there line of fate is not mixed with line of head! Then what is the difference between those people with the separated line of head and line of fate? One of the things is balance. For the people with these 2 lines merged, if things go haywire with their ideas, they may feel struck in life, they find themselves directionless in life and may feel depressed; These people are also so much absorbed with their ideas that they forget(absent minded) with other regular routines and tasks in life. The other things in life such as home, family doesn't carry any value. They become workaholic.

The buck doesn't stop here. There are many variations of the combination of this head line and fate line based on the the line formation, hand shape, skin structure and so-on and so-forth.

I hope, this article helped you in understanding the combination and differentiating features. Appreciate your comments and feedback.
Posted by Kiran Katawa at 11:31 AM 3 comments:

Prediction and Non-Prediction - Hopes for the Readee

Palmreading, in India, is called "Hasta Saamudrika Shasthra" or "Hasta Jyotishya".The "Jyothishya" or "Shasthra" mainly emphasizes on predicting the future, mostly related to marriage, children, win/lose in a election, purchasing a house, foreign travel,litigation, fame-name, money etc. But, not a deep, detailed and worldwide accepted theory have been established on identifying the timelines of the events, nature of the events using palm reading (Which is even open for debate).

The size of the hand, the direction of the the lines varies from person to person. There isn't a fixed scale which says - a point on a line at this position of (x,y) co-ordinate would occur at this age. However, an approximate guess with few +/- years(!) can be foretold. Then, what's the use? Someone would come for a palm reading, 'coz, in most of the cases, he/she is in a troubling situation and would like to see if future has any hopes for him/her and if so when is it?

The situation is quite understandable.  All the questions/expectations, which I mentioned  above,which a readee would like to seek the answers for, are very important(to the him/her).  No denial on that part.  But, peeping into future and telling what's in there, is not the only way to fill hopes in/help a human being. Let me enlarge the the matter and widen the perspective. When an event occurs in a person's life, note that its the person, as a human being, would live the life after the event. Also, its the same person who lived the life, before the event. The way one has been made up physically, mentally and emotionally so-far and the way one would act/react to these events physically, mentally and emotionally is what matters more than the occurrence of the event itself.
Let me take 2 examples:
1. Consider that a person was looking for a job and he gets it. The way he does the assigned tasks at job is the same way he would do the job elsewhere in his life. The style of execution, the confidence in himself, the social networking etc would remain the same BEFORE and AFTER getting the job. The job has helped him in changing his financial status. But, the way he utilizes the money BEFORE the job and AFTER the job is the same. If he was a stingy, he would be worried of losing the salary he is earning and try to save more. If he was spendthrift then the  salary is still less for him. The core of his behavior remains the same.
2. Consider marriage, a very important relation in one's life. The way a person relates, trusts, enjoys, co-operates and respects is very important for the success of a marriage than just marrying. It is very much related to the way he relates to himself and many others in the life. There is always a possibility that he might get a bad partner( say a drunker, stingy, immoral person, non trustworthy). If that is the case, he should be in a position to have patience to make-up the other person or break the relation. This is also a way he relates.

The thing to note here is - the event occurs. But, the way one relates and responds to the event matters. Its the person who lives the life day-to-day before and after the event. So, having a better understanding of one's SELF, the likes-dislikes, the known and unknown fears, the questions such as - "why am I so and why not others or why am I not so and others are so?", the balances and imbalances in one's make up, comfortable approaches for a work style etc would be of great assistance in taking the control of life. This knowledge is profoundly reliving and encouraging. A good palm reading takes you for a journey into YOUR-SELF, shows you the known/unknown corners of your own psychological formation. One such journey, though non-predictive in nature, would definitely be greatly helpful, motivating and directional.Remember - "You're slave of the character/psychological formation, till you're unaware of it; The moment you're aware of it, its your slave and you can further moderate it".

In the last century, there has been plenty of study and research on palm reading, the finger prints and palmer glyphs. The study has established an in depth, qualitative direction to the study of palms. This is in depth and qualitative 'coz, the theories have been established and accepted and psychologically (and many a times medically) rendered a great help.

In my upcoming articles, I would write on some examples from my reading sessions that has helped the readee's in getting a better understanding of the self.
I welcome your feedback and criticisms.
Posted by Kiran Katawa at 5:12 AM 4 comments:

Kiran Katawa
Bangalore, Karnataka, India
I am Software Engineer by profession. Out of my interest, I have moved towards studying psychology thru Transactional Analysis and Coaching. I now provide freelance life coaching.